About “To be continued…”

… a cultural and educational project for pupils from 10 – 15 years old.

Does the project title sound familiar to you? If so, you are probably Austrian (just in case: there is a “German” version of this) and you are recalling an ORF (Austrian TV) literary program from the late 80’s and early 90’s titled “NOT to be continued …”. Today, the presentation of children’s and youth literature remains central to our project. However, “To be continued..” not only puts the books themselves in the hands of the children, but – due to modern technology – the overall production process of the presentation of these books. In the course of the project participants change  from readers to narrators and screenwriters, and finally to audio book, film or theater artists. To support the participants in their workflow “To be continued …” gathers teachers, librarians, dramatists, theater educators and filmmakers in the project team.

Various events and workshops, designed and directed by these professionals, accompany regular classes (e.g. language classes). Our team supports the students in forming project-groups, doing research for a novel suitable to all group members, in the development of a script and last but not least in the production of a short radio play, film, or play where each group aims to present their novel in a catchy way – but beware the spoiler alerts! As the journey shall continue where it began: in the book itself.

At a glance – workflow

(for further information – e.g. objectives – please click on each phase in the sidebar on the front page):

Step one: Research and book selection

Like other project phases, research and book selection combines a fixed part of the program with freely configurable elements. Facing a longer time frame in working with the medium of books, many students welcomed a 45 minutes of listening to selected book dialogues as a warm up. With some exciting literature scenes, the class gets attuned to the work with books and already develops some ideas about a genre or even a specific book to use in the project group. Reading in front of the class is a good occasion to discuss one or the other open project question – before the project really starts.

The City Library of Vienna has already been won over to the pilot project as a strong partner. We share the common goal of strengthening the library’s role in both – the improvement of the reading socialization of young people and the training of their (digital) research skills. In addition to an orientation event, during which all students receive library ID-cards, and the deepening of the library’s online research platform in school lessons, a second visit to the library at the end of the phase is recommended. The students may have a little more time to complete their book selection in the group and they can already experience themselves as skilled – familiar with the research – users of the institution. If there is an internal school library we recommend to include its visit in the schedule of this phase. 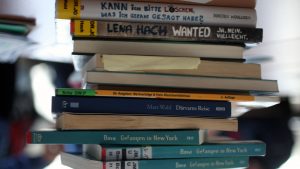 After the pupil’s formation of project groups, the selection of their books and organisation of all book copies (from other local library branches), participants individually read their novels, or, may gather in (digital) reading circles. In order to support a continuous reading process and to prepare for the subsequent writing workshop, work tasks (homework) accompany the reading process. During the approx. six weeks of reading about 3-4 work tasks are recommended, which are collected in each student’s project folder. The trainers of the writing workshops should – in consultation with the teacher – be free to design the final task. These homework also serves as an initial basis for discussion in the workshops. Therefore, the project booklets are collected one week before the writing workshop starts and are handed over to the workshop trainers. 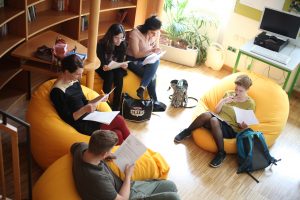 Thus prepared, the project groups and trainers meet for the first writing workshop on the premises of the school. In a total of six lessons (300 minutes), they are now developing their scripts. The writing coaches lead the creative and group-dynamic processes independently (for example, using theater pedagogical methods). Together, the participants of the project groups re-immerse themselves in the material of the novel, discuss common perspectives, select the material of their storyboard and transform the result of these processes into two short film, theater or radio drama scenes. In addition to the task to give an insight into the plot of the novel, the development of an open, suspenseful conclusion (Cliffhanger) represents a special requirement of these scripts. 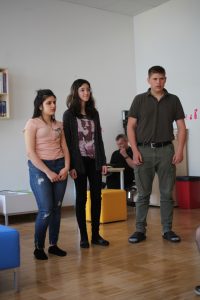 Still under the guidance of professionals, in production workshops the project groups then realize the 3-5-minute short film, theater, or audio book scenes. The production workshop covers only two units (100 minutes), and therefore builds on the solid output of the previous writing workshop, where the pieces had been rehearsed in the last unit. In the areas of film and radio play production, one of the two production units can thus be dedicated to final production (editing, mastering, rendering …), while only the first unit is used for filming or sound recording. On the mobile phone (smartphone), the pupils themselves film their activity. In the theater workshop, on the other hand, both units are dedicated to the work on the acting performance. 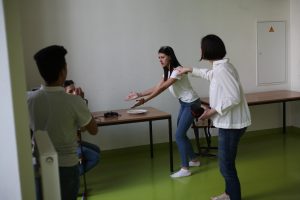 In the final phase of “To be continued …” it is said, “Clear the stage!”. The results of the work from previous weeks are now presented to the audience. The project groups, pupils, trainers and teachers now have the opportunity to exchange all their experiences made, regarding the project’s time frame, decision making processes, group dynamics, division of labor, genre, art form and so on… The presentations take place being part of a regular class lesson. With a maximum of five project groups / class, each group may have five minutes to present their work and about the same amount of time for immediate discussion. At the end of the performances, the project will be dissolved.