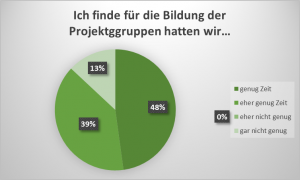 1) Time to form the project group: At large, the students of the ERG rated the temporal dimension (given time frame of a certain process) of the group formation positively. 48% said there was „enough time“ available for the formation process, and 39% felt,  that the amount of time was „rather sufficient“. Nevertheless, three pupils ticked the box „not enough time at all“ on the evaluation sheet. 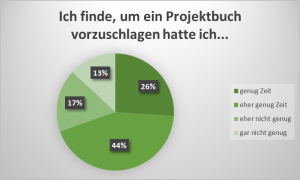 2) The question of the temporal dimension of proposing a novel to the group was also rated as sufficient. Nevertheless, as many as 30% of the participants regarded the time dimension of this particular process as being too short. With the creation of „research and selection“ as an independent project phase and the increase in temporal resources, we reacted to this evaluation results. The process of group formation, research and book selection may take up to 4 weeks now. 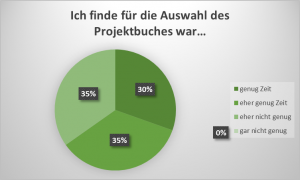 3) Quite similar (as in the PTS) the evaluation of the selection phase as a whole. One third of the students rated the time concept negatively as „rather insufficient“. With the creation of „research and selection“ as an independent project phase and the increase in temporal resources, we reacted to this evaluation results. The process of group formation, research and book selection may take up to 4 weeks now. 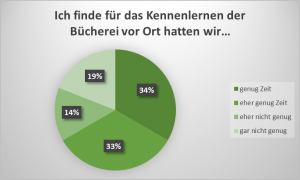 4) In regards to the temporal dimensions of the library visit (detailed results for the library follow) participants felt, that there was some space for improvement as well. While two thirds of the students were of the opinion that they had „enough time“ or „rather enough time“ to become acquainted with the library, one-third regarded the time frame as being insufficient. 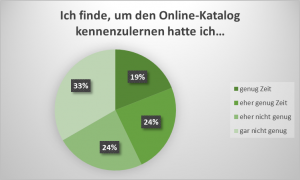 5) Unfortunately our objective to provide basic user skills in dealing with the online research tools of the Vienna Libraries must be judged ineffective in the first evaluation – in the ERG as well as in the PTS. The evaluation, which is used for the restructuring of individual project phases, gives reasons for immediate improvement in this specific process. We therefore aim to repeat the know-how during an additional lesson in the regular class. 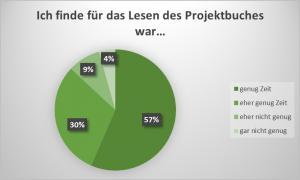 6) Without a doubt, the temporal dimension of the 6-week reading phase can be seen as sufficient. An overall of 87% rated the given time frame positively, while only three students stated that they had „rather not enough“ or „not enough at all“ time to read the novel, they had chosen. 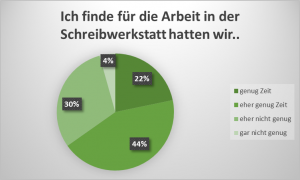 7) At large, the temporal dimension of the writing workshop was rated as rather sufficient by the ERG pupils. Nevertheless, the positive assessments mostly concerned the answer category „rather enough time“ and only 22% stated, that there had been „enough time“. One third of the children regarded the time concept as being insufficient. 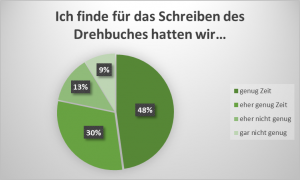 8) Unlike PTS students, the children of the ERG rated the time available for the actually writing of their scripts more positively than the temporal conditions of the writing workshop itself. Nevertheless, the difference might have been caused by the rudimentary work on film or theater productions during the writing workshop.

ad 1) As a consequence of this first evaluation process of „To be continued…“ and its results, a new project phase was established: „Research & Selection“. While processes of group formation, research and book selection had been previously subsumed in the literature phase, the latter will in future be divided into two phases: „Research & Selection“ and „Reading“. Due to the very positive evaluation results of the reading time (see question 6), one week moves from this to „Research and Selection“.

ad 2) Together with a temporal increase of the research time in the project goes a new concept in providing digital know-how to the pupils. In addition to the obligatory guided tour at the local library, and a first introduction to the online research platform, it is highly recommend to repeat the digital know-how during a regular class unit. A second (free) visit of the library may then complete the phase and provides the opportunity to the children to experience themselves as skilled users of the institution.

ad 3) To fit in any sort of production works (filming, theater rehearsals) apart from script writing in the context of the writing workshop is not primarily a problem for the project evaluation, but of course for the entire process of production. Production workshops (at least 2 teaching units) following the writing workshop remain an essential must-have for a high-quality working atmosphere, substantial project results and satisfied participants.