Home Students voice on „To be continued…“ (P4)

Students voice on „To be continued…“ (P4) 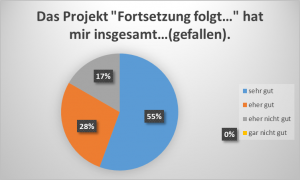 In the course of the evaluation, the children had the chance to give free feedback. Of the 18 participating pupils, 16 took advantage of this opportunity.

„In general the project was fine, but since I missed a lot and participated only occassionally, I can not say well if I liked it.“

„I was the cameraman, but I’d rather be in front of the camera, I really liked the project and would like to repeat it.“

„I liked this project group because I learned so many new things.“

„It was a bit boring, but at the end (the last hour) we enjoyed it and it was funny.“

„I would do such a project again but without reading a book.“

„Well, I liked this project week a lot and also the cooperation was great, unfortunately we could not finish in time because of 2 of the students in my group…because they had a fight. I thought otherwise, and I liked everything. (Thank you very much)“

„I think the project was very short, it should have taken a little longer, then we would have had a little more time, but I really liked the project.“

„I really liked the project, but I would like to have other „colleagues“ with me for the next time, because you could not keep up with them. Otherwise everything was fine, except that it was really fast, the time …“

„It was fun, but it was not enough time.“

„I’d like to do a little better with the 2 scenes that I performed with my friends in front of the class…I’d like to better know the text. Otherwise I liked the project a lot and after all I enjoyed it.“

„It was really funny, because two groups worked together, and in the end it was the presentation of our book, that was good and everyone or many liked it.“

„I really enjoyed the project in the end, it was really fun with the second group, it was a lot of fun.“

„It was a lot of fun to work in the project group.“

„I did not think it was so good that we had too little time to finish our project, so it would have been better if we had 2-3 hours more.“